Charlie is more than a dog.

Though my family had him since he was a puppy, in 2004 he came to live with me full-time. He became king.

Always having been an outside dog, he was thrown into a world where he didn’t have to fight to get to the dog bowl and got to sleep among pillows and soft comforters. An escape artist, he’d flee and be back within the hour, waiting on the front porch. The same porch he’d eagerly await my arrival after class each day. He was my best friend.

Michael and Charlie had a special bond. Something I was admittedly jealous of. Charlie would do special tricks and give extra kisses to Michael. He was a daddy’s boy.

When Michael got deployed to Iraq, Charlie was his wingman. Michael had a talk with him to watch over me and take care of me….Charlie never faltered from that agreement they silently made looking into each others eyes before Michael kissed him goodbye for the last time.

When I was sad, Charlie would quietly walk up to me and give me a kiss. He always let me know everything was going to be alright.

On May 21st, 2007, Charlie would have to step up to the plate even more. Michael had been killed and I was shattered. I refused to eat or drink, and Charlie, who never left my bedside, refused to do the same. He was the only reason I would get up….to ensure he’d eat to live another day.

I never thought I’d live longer than Charlie or Maximus. I even have in my will who each are to go to.

In the months following Michael’s death, I stayed inside, planning my escape route from Earth. And yet, Charlie, with his deep brown eyes, always found a way to ensure I face a new day.

He’s a quiet soul who reminds me of Michael. He rarely barked but was known for being a fighter….literally and hypothetically. He had sent a couple of dogs to the vets whenever they got to close.
(I remember one day, napping, when I heard a barking scuffle outside. Pillow in hand, I ran to find Charlie and a boxer going at it. Pillow’s swinging left to right, I feared for Charlie’s life, only to find that the giant boxer was the one harmed.)

As I ventured into a world I decided to fight for, Charlie rooted me on. I talk to him, you see. He’s the child of Michael and I, and I feel he understands what I’m saying…never doubts or challenges.

The next 3 year’s I would travel so much in hopes to bring the AWP to life, but no matter what, he’d be there at the front door to greet me and give me a kiss hello.

In October of 2010 things changed. One night while on the carpet with Papas (one of his 20 million nick-names), I noticed his eye looked weird. Right away I knew something was wrong and asked my parents to take him into the vet (I was afraid to face any bad news).

My dad called me. “Taryn…Charlie has cancer. He has a tumor growing on the top of his head. He doesn’t have much longer….”

No.No.NO. Our baby couldn’t go. I frantically started making calls within minutes of finding out and set up a meeting with a veterinary oncologist.

In November they called to let me know that Charlie had squamous cell carcinoma. I went in to see what the options were.

The doctors told me that I could put him through radiation and chemo. Once done with the treatments it could possibly add no more than a year to his life.

I agreed, and so began our new life of waking up each morning for months. Traveling over 2 hours each day. Things would look good and other times I’d bring him in crying, afraid that I had made the wrong decision. But Charlie fought, pulled through, and one night, even ran up to me and gave me a kiss. It was one of the best moments.

The radiation took a toll though, and the skin burned away and then his vision deteriorated.

I cried myself to sleep many nights, but even blind, Charlie would find his way to our bedroom and sleep next to me.

It’s been around 5 months since all of his treatments. 5 months I’ve been able to give him extra belly rubs. 5 months to whisper into his bushy ears how much Michael and I love him.

5 months to have something I wasn’t able to have with Michael….the ability to say goodbye.

I returned home two nights ago and Charlie’s health had deteriorated within hours. Although he had been eating and drinking while at my parent’s house, it became very obvious that he was just waiting to be back with me.

You see, I’ve wondered often if my actions to keep him here, to do everything in my power to keep him with me, were selfish. I asked Michael during the rough times to just let Charlie go in his sleep. But on Tuesday night, I asked Charlie to let me know when he was ready, and at one moment, he looked up at me…blind, but as though he could see, and I knew.

I knew that it was time to do for him something unselfish, and take him out of his pain. I think he breathes for me, suffers for me, feels indebted to his loving father to stay with me….I want him to know it is okay. 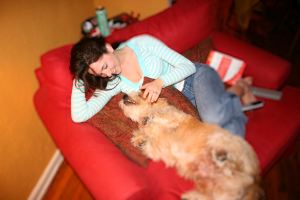 I’ve had him for 15 years. He’s been through every life-changing event of my life, but tonight, at 6pm, on his favorite spot in the house (the cold tile of the fireplace), Michael will have his 2nd love join him.

My dearest friends and family by my side, we will wrap him in Michael’s uniform (the one he slept underneath in the closet after Michael died.) Fill the pockets with letters to him and our loved ones he’ll be joining and spread his ashes with his father’s.

I’m in pain…but Charlie is in more. And tonight we will celebrate his furry life. Remember random memories, like how when I took him running he always ran faster than me, making me look even slower, so I had to buy a really short leash. Or the moments when a spurt of energy would hit him and he’d run around like a banshee. Or the time he sat up on Michael’s knees and kissed him farewell. Or how much you simply adore window surfing.

I love you so much, papas. I know you’re outside sleeping with the wind on your face, and maybe by the time you wake up, it will seem as if we were not parted for long.

You have fulfilled you daddy’s wish and taken care of me better than anyone or anything. I know I am strong enough now…and so much of that is because of the loyalty and love you have forever shown me. You are the epitome of unconditional love and I hope to embody your strength.

There’s a stone I had made for Luke at the top of the hill road, where the pasture opens wide and the setting sun highlights the words carved into its face. “That’ll do, Luke, that’ll do.” The words are said to working dogs all over the world when the chores are done and the flock is settled: “That’ll do dog, come home now, your work is done.” Luke’s work is done too. He took my heart and ran with it, and he’s running still, fast and strong, a piece of my heart bound up with his, forever. 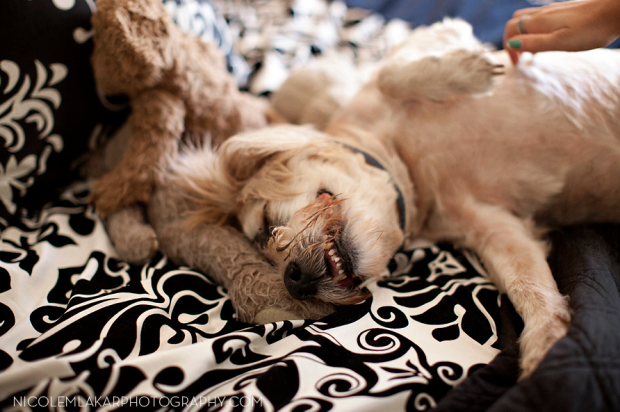