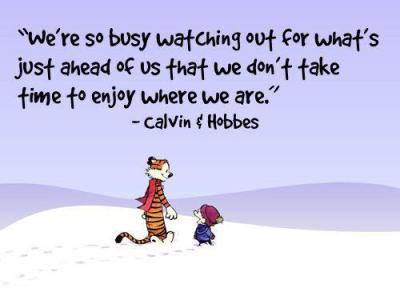 A kid’s pretend friend that he asked lifes big and not-so-big questions to. An invisible tiger that always seemed to help guide him through his childhood.

Michael became that tiger to me when he died…he became the person I talked to for guidance…who I asked life’s questions to. But the response I knew would never come from him…it would have to be felt and heard by me and me alone. But still, I asked. I screamed and cried for reasoning to this tragedy before me.

As time has passed though, I’ve noticed that fewer and fewer of those questions on life, do I want, or even need an answer to. Just as a child grows up not needing a fictitious animal to guide their way.

In no way am I stating that I don’t still lean on my baby in the toughest of moments, but I’ve realized that the moments where I have been the most incapacitated by grief, are when I have been thinking about nothing but the future, the world in front of me without him by my side.

2012 is carrying a new constant that I know would make him happy, and I know brings a smile to my face. One I picked up along the in 2011.

A constant that freed me from the constraints of life that my pain and loss had me chained down with… had imprisoned me with its uncertainty.

The constant of living now…and nothing more.

I know the future will be what I make of it, but my present…my present was awaiting me to embrace it…and for more than just a second…I have done so.